What Is the Best Time of Day to Go Fishing?

Honestly saying, you can fish at any time you want. But will that be appropriate or beneficial for you, that is debatable.

The simple reason is, you don’t know when your targeted fish spawns. You need to plan ahead of the trip. Which day to go, check the weather forecast, find out the best fishing spots through local, etc.

See, lot’s of planning right? But don’t worry we will try to minimize that in this guide. 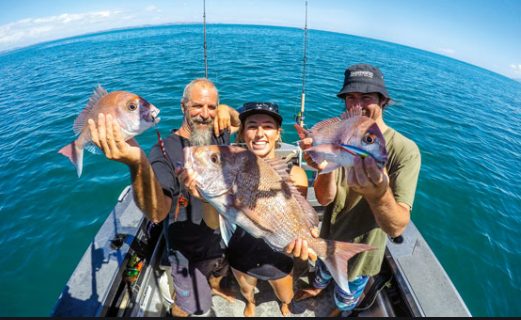 In case you didn’t know, some fish tends to spawn at specific water temperature. Some species prefer cold water where some prefer hot water.

That should answer your question about seasonal fish.

That’s why you need to find out beforehand whether the water you are fishing in is cold or hot.

During late spring this can be a great time to go fishing. Enjoy the sunrise and catch some fish for breakfast and lunch. Besides fishing, you will have tons of fun guaranteed.

Another benefit of early morning fishing is you won’t see many people fishing during that time. People tend to sleep during that hour so you won’t get that much traffic. As there won’t be anyone to fish alongside you, you can increase the catch rate thanks to that.

But don’t forget that early winter mornings are not good for fishing. Even if you are fishing for cold water fishes, they won’t surface during the morning for you to catch.

You will be wasting your time if you do that.

This time is often very difficult to fish well. As you are directly under the hot sun you will get tired and exhausted after a while.

Also, the fact that most fish will swim to deeper depths to find cold water won’t help your cause either.

As the sun ray is stronger during this time the bass and other fish can see well under the water. Making your bait useless. They won’t fall for that easily. That’s why you shouldn’t fish during this time.

But if it’s raining or the atmosphere is windy then the scenario changes completely. During the rainy season, the water temperature stays cold most of the day.

Also if you are fishing during the winter, this is one of the ideal times to fish.

As the early morning, late afternoon is also a productive and active time for fish. A lot of fish hunts for food and migrates from water to water during this time. As the sun starts to set a lot of fishermen also tend to abandon their session and go home. If you are willing to stay the time and cast some more you might get rewarded for your patience.

Just remember the situation is the opposite of the morning scene. During the dusk fish like bass hunts for prey as they prefer dim light. The water temperature becomes normal and the surface water cools down. So, you can find a lot of bass during that time.

When the water is warm, during the period of sunset and midnight. It’s a great time to buckle up and hit your local lake. But you need to keep in mind that the lighting condition won’t be in your favor. Don’t forget to take a good torch with you.

But it’s a great time to catch bass, walleye, and catfish. As the night will start to drop and the temperature of the water gets even colder, the productivity will slow down. So, you need to know when to quit.

You can fish at any time as your heart’s content. But that won’t be effective if you don’t even follow the basic rules.

Inflatables Master participant in the Amazon Services LLC Associates Program, an affiliate advertising program designed to provide a means for us to earn fees by linking to Amazon.com and affiliated sites.